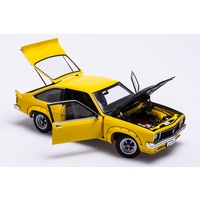 Towards the middle part of the 1960’s, Holden identified that many Australian families now had the capacity to become owners of two cars, but they didn’t have a viable model to fill this new gap in the market - a car that was smaller and cheaper to buy and run than anything in the current Holden fleet. The answer came in the form of the Holden Torana.

The Holden Torana, like most popular car models was continually evolving. The initial release of the new model was very well received by the Australian public, and fulfilled the purpose for which it was originally made. It wasn’t long though before the humble 6 cylinder Holden engine found its way into the range, transforming the Torana into a lighter, nimble driving machine that was simply put; fast. The evolution wasn’t limited to what was under the bonnet. The body and styling transformed from the sleek LC and LJ range to the decidedly sharper and significantly “meaner” looking LH and LX models, which culminated in perhaps Australia’s ultimate muscle car, the Holden LX Torana SS A9X.

The A9X was built with one purpose in mind, to dominate Mount Panorama. Significant upgrades in almost every area of the car were engineered to give the A9X the edge on its competition, both on the road and more importantly on the track. A new floor-plan enabled the A9X to use a new rear axle and 4 wheel disc brake set up, the steering gear was now mounted onto the chassis which improved the steering feedback significantly, the radial tuned suspension was another integral aspect which attributed to the drivability of the car, and even the front spoiler of the A9X was designed to incorporate vents to channel cool air onto the front calipers, which helped the braking capacity for this beast, allowing the driver to draw every last inch of power out of the 5 litre V8 engine.

While these improvements were remarkable, perhaps the best addition for the everyday punter to the LX A9X package was the fact that the radio was now included as a standard feature, rather then as an added cost option!
It must also be noted that there was only ever one A9X Hatchback produced in Absinth Yellow, making this model a replica of a very rare beast indeed!

Produced in the one of a kind Absinth Yellow with Black bonnet colour scheme, this is one of the best looking variations of the popular A9X muscle car. Produced in diecast with fully opening parts, detailed interior and engine bay, and immaculate finishing - this is a model for any Holden or Muscle Car enthusiast so don’t miss it.

Produced in fully opening diecast, this model will be set to an exclusive limited edition based on order numbers and will come with a numbered Certificate of Authenticity.