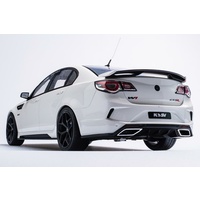 Biante Model Cars are very proud to announce the second editions from the stunning 1:12 2017 HSV GTSR range. These being the striking Heron White GTSR W1 and Sting Red GTSR.

After the fantastic response from collectors and HSV fans late last year when we announced the first 2 colours of this range, Biante have agreed with HSV to produce the rest of the colours pending orders. They are part of a project they have been working on with HSV for over a year to provide something very special for both model collectors and the very proud owners of the 1:1 versions so we would like to give each owner an opportunity to have a model of their car in their colour at the centre piece 1:12 scale.

As previously stated these will be their first foray into road cars for the 1:12 range and haven’t held back. Developed directly from the genuine HSV CAD data, these models are as accurate in shape as possible in model form. They've also added extra details like metal etch parts for the brake discs and front grille mesh, together with all the little details that distinguish the W1 from the GTSR such as the Pirelli P-Zero tyres, carbon fibre detailing, and W1 badging. They have even gone so far that if you turn the W1 model over you will see the dry sump of the fire-breathing LS9 engine!

They are currently planning on producing these models in the centrepiece 1:12 scale but if you’re a fan of the smaller scales, don’t panic. Earlier they mentioned that these are just the first models in the GTSR range. There are other sizes in the pipeline as well! There’s much more to announce in 2019 so bear with us. Exciting times are ahead!

Produced in high quality sealed body resin, the 1:12 GTSR and GTSR W1 are finely crafted collectables. They will be produced to order pending minimum order numbers are reached.

As with all Biante 1:12 scale models, these items will come with a numbered Certificate of Authenticity and premium packaging.