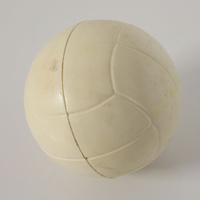 Shelley O'Donnell is an Australian netball player. A ten-year veteran of the Australian national team, she was also the inaugural captain of the Melbourne Kestrels in the national Commonwealth Bank Trophy from 1997 to 2000. After two years out of the game between 2001 and 2002, she made a comeback in 2003, but retired after again becoming pregnant at the end of that season. She was subsequently lured out of retirement by the Kestrels, and played a number of games in 2005.

The ball has ware on it as shown by the photos.