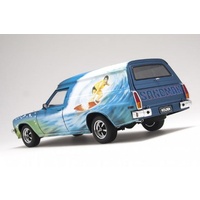 Up for sale is a AUTOart 1:18 Holden HZ Sandman Panel Van

AUTOart are extremely excited to present the 1:18 Scale Holden HZ Sandman Panel Van in the iconic “Seawitch” paint job. The Holden Sandman is a car that is uniquely Australian, representing our free spirited and beach loving surf lifestyle that was at the height of its popularity during the late 60s and 70s. Available in a range of striking colours and bold decal options, the Sandman quickly became a fan favourite for the Australian public and has since become somewhat of a cultural icon, something that not even Holden would have dreamed of when they released the original HQ in 1974.

The HZ represents the last series of the Sandman produced commercially for sale between 1977 to 1979. Released with a V8 engine and Radial Tuned Suspension as standard and features such as bucket seats, GTS components including the dash, steering wheel, rally rims and front lower scoop, the HZ has since become one of the more popular Sandmans to have been released.

The popularity of the Sandman increased further when the Seawitch started appearing in Holden marketing material at the time. It could be argued that the Seawitch is one of Holden’s most impressive concept / marketing cars ever produced and it may well have been responsible for starting the surfer panel van craze during the seventies with many free spirited wave riders using the sides of their vans as mobile murals, painting them in all kinds of colours, designs and slogans reflective of the era. The Sandman was effectively the Australian answer to the Volkswagen Kombi in terms of offering a vehicle that could be driven up the coast, slept in and had plenty of room on the sides for some custom paint work!

The Seawitch model is very impressive and quite difficult to produce. It uses various paint sprays, masks and a complicated decal to replicate this iconic decoration which has increased the retail price ever so slightly to account for the extra work required to produce this model effectively. Like our previously released Sandamans, the Seawitch will include a separate set of roof racks and surfboards as an additional display feature which is quite fitting for this model.

If you’re a Sandman fan, Holden collector or just simply love unique Australian cars then please place your pre-orders for the Seawitch as soon as possible to ensure you don’t miss out.

Comes with limited numbered certificate of authentication Has opening parts.