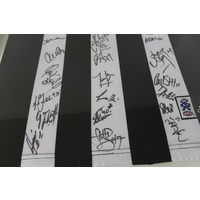 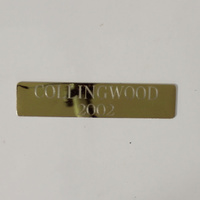 Up for sale is a framed Collingwood Magpies Jumper

In a tight and overly enthralling exhibition of AFL football, Brisbane withstood a brave challenge from Collingwood to win the 2002 AFL Grand Final by nine points, taking out their second successive flag. It was the first grand final to be decided by less than four goals since 1989.

The first goal of the match wasn't scored until very late in the first quarter - in fact it was the only one scored, by Collingwood's Anthony Rocca. This snapped Brisbane's VFL/AFL record streak of 253 consecutive quarters in which it scored at least one goal. It was the lowest-scoring quarter in a Grand Final since 1960.

In the second quarter, Brisbane looked like pulling away at half time with a late run of second quarter goals before Collingwood surged back in the third quarter.

It was goal for goal in the last quarter with a controversial goal umpiring decision going against Collingwood's Anthony Rocca not long before Brisbane's Jason Akermanis slotted a snap shot for goal late in the last term to drag the margin out by more than a kick. In the end it was enough for the Lions to hold on for back-to-back premierships. An enduring image of the game is of emotionally exhausted Collingwood players including Paul Licuria, Nathan Buckley and coach Mick Malthouse breaking down in tears after the full-time siren.

Nathan Buckley of the Magpies was awarded the Norm Smith Medal for being judged the best player afield, despite the fact that he finished on the losing side. This is only one of four instances of a Grand Final player having won a Norm Smith Medal without being on the winning premiership team. Out of respect for his teammates, Buckley took the medal off as he returned from the dais.