This week Binate have three new 1:18 Scale Holden VF Commodore V8 Supercar models from the 2014 and 2015 championship seasons. They include the 2014 Lockwood Racing car which was driven by Fabian Coulthard, the 2015 Supercheap Auto Racing car in the special 300 stores livery which was driven by Tim Slade and the Lucas Dumbrell Motorsport entry which was also driven in 2015 by Nick Percat which features a livery that really looks fantastic for a smaller team.

The Lockwood Racing car in particular has been a highly requested model from us. Fabian Coulthard’s stature as one of the top drivers in the category was cemented during his time with the Brad Jones Racing run team and the livery really is impressive to look at.

All three models have been produced in a limited edition of only 504 units and come with a numbered Certificate of Authenticity. As with all Biantes 1:18 COTF V8 Supercar models, each one has been produced in die-cast with detailed interiors and fully opening parts other than the boot. 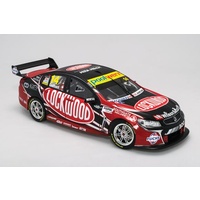