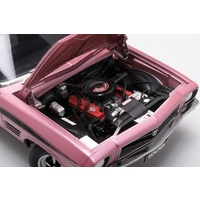 Up for sale is a AUTOart 1:18 Holden HQ Sandman Panel Van

Biante Model Cars are pleased to present the 1:18 Scale Holden HQ Sandman Panel Van in Orchid Metallic. This is the follow up to the previously released and very popular Chrome Yellow HQ Sandman and it’s looking like it will be another beautifully presented model for Australian road car fans.

You would be hard pressed to find many Australians who have never heard of the Holden Sandman. Whether it was the original HQ which was released in 1974, the HX or HZ which featured the now iconic Sandman writing across the rear tailgate or of course the more modern examples which have recently been announced by Holden, the Sandman has always had a remarkable appeal to motoring enthusiasts.

The Sandman was originally conceived as a car which would appeal to the sun, surf and youth culture which was beginning to grip Australia during the period and in January 1974, the first HQ rolled off the line. Both the Panel Van and Ute would fill holes in the consumer market with the van coming equipped with GTS style slotted front guards, GTS Rally wheels, bucket seats, GTS steering wheel, full instrumentation and Sandman decals and stripes. The main knock on the HQ Sandman was the soft suspension but that didn’t seem to deter the punters with many sources claiming that the introduction of the Sandman was the beginning of the end of the Monaro, with many young men of the time opting for the Sandman as their new favourite two-door model.

We’re extremely excited to be producing this model of such an iconic Australian car and it’s sure to be a popular addition to collections.

The 1:18 Scale HQ Sandman is another remarkably produced model car featuring numerous tooling modifications which have been made to accurately replicate the HQ compared to our previously released non-HQ Panel Vans in this scale. Some of these HQ specific features includes HQ specific gills in the canopy, and new seats, door trims and front grille. Similarly to our previously released 1:18 Sandman models, the Orchid Metallic HQ features exceptional paint finishing and will come with a set of removable roof racks and surfboards as an optional display feature.