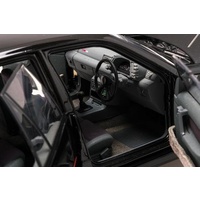 The Holden VN SS Group A was an exceptional Australian muscle car which was built under contract by HSV for General Motors Holden Australia and was released in the month of November over twenty years ago in 1990. This car has the honour of being described as the last Group A model to be produced by General Motors Holden Australia due to changes in CAMS regulations and in addition to that title, it also carried the mantle of being the most expensive HSV ever released at that time with a price tag of $68,950 which was $13,000 over initial predictions, which wasn’t the most ideal price point considering the financial hardships Australia were facing during this period.

The price tag included a raft of firsts for an Australian produced car including a special 17 inch wheel and tyre combination with 45 inch profile tyres and a completely redeveloped engine with an extra strength manual 6 speed gear box. According to HSV, the 215KW V8 theoretically could produce a maximum speed of something close to 400KM/PH, but the 6th gear ratio was too tall to break any high speed records. In addition to this there was a rumour that General Motors added a speed limiter at the time which would see the fuel supply cut if the vehicle reached speeds of 250KM/PH - but as the case is with many rumours, General Motors never confirmed this.

Other technical inclusions that were featured in the VN SS Group A saw the engine block receive a Chevrolet bell housing bolt pattern along with a high torque AP racing clutch, a somewhat redesigned suspension system and a re-engineered engine that had similarities to the previously released VL Group A SV. Another similarity that the VN SS Group A shared with the VL was its body kit and modifications. Although the VN wasn’t quite as radical as the VL, the body kit was developed in Britain’s MIRA wind tunnel and the rear wheel housings were modified to ensure that there would be enough room for racing tyres when the car was sent to the race track.

Initial build numbers for the VN SS Group A were predicted to be 500 units, but the actual number fell short of that figure with only 302 cars eventually being made. All of the cars in the production run were painted in Durif Red with a deep grey interior. Interestingly, the cars colour was named by General Motors Holden Australia’s head of motorsport John Lindell because the colour reminded him of the wine colour of the Portuguese Durif grape variety. Despite the main colour being the Durif Red, there were two rare models finished in Alpine White which were received by the Holden Racing Team and the engineering department of General Motors Holden Australia. These two models didn’t receive a build number and were labelled as pilot vehicles. Another two models that did receive a build number though were two VN SS Group A’s that were produced with the Durif Red paint job but were later sprayed a metallic black as part of a prize promotion for the 1991 Tooheys Bathurst 1000. These two models featured a red racing stripe down the lower body and special Tooheys 1000 decals.

The VN Group A mould is perhaps one of the finest examples of an Australian die-cast model produced by Biante. With standard features you would expect from us such as fully opening parts, highly detailed engine bay, interior, exterior and undercarriage combined with even higher detailed characteristics including fine seat flocking in the interior, raised “Goodyear Eagle” lettering on the tyre walls and authentic bonnet hinges and gas struts, this is an amazing limited edition model car. We have even replicated the correct build number from the Holden factory for this particular VN on the dash!