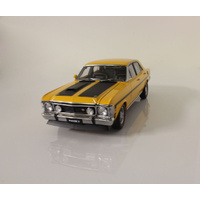 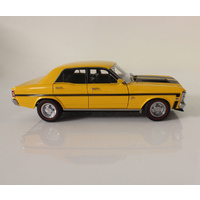 In May 1969 the first XW GT rolled off Ford’s Broadmeadows production line with it seemingly set to become Ford’s ultimate Grand Tourer, but things would soon change. Roughly one month later in June, the ‘HO’ variant was unveiled to the Australian motoring public. The HO stood for ‘Handling Option’ but essentially, the majority of upgrades were focussed on the engine which set the wheels in motion for the GTHO to become one of Australia’s most revered nameplates.

In June 1970, Ford introduced the XW GTHO Phase II. Most of the changes were under the bonnet, with the introduction of a revised Cleveland 351 engine. This revised Cleveland was mated to a new close ratio gearbox, new diff, diff housing and associated rear drive components. The braking system was also improved and with these modifications to the XW GTHO in place, Ford would see great success on track with Allan Moffat taking out the 1970 Hardie-Ferodo 500 at Bathurst. The age old adage of ‘Win on Sunday, sell on Monday’ was well and truly born and Ford had an iconic car on their hands.

With the XW GTHO Phase II’s muscle car credentials having been proven on track and with it’s bold, striking looks, it isn’t hard to see why this car was - and still is hugely popular.

When these significant tooling upgrades are combined with the usual high detail, opening parts and pristine finishing then you have a remarkable die-cast model of one of Australia’s finest muscle cars and it certainly won’t look out of place in any model car collection.