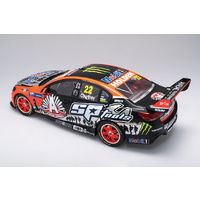 After being introduced in the 2013 season, Holden Racing Team’s ANZAC tribute has become an annual initiative by Holden and HRT. It is supported by the Returned & Services League, with the livery raising awareness and funds for the RSL’s annual ANZAC Appeal. The 2015 version saw Holden’s famous HRT lion and driver logo again replaced by the RSL’s ANZAC Appeal Rising Sun logo, with a silhouette of ANZAC diggers from the original Gallipoli landing featuring on each side of the car and bonnet. The ANZAC Appeal logo was also featured on the boot lid, with “ANZAC Centenary, April 25, 2015” featuring above the front windscreen and on the rear wing.

When the livery was announced in 2015 Courtney highlighted the fact that the ANZAC tribute is a memorable part of HRT’s year. “The ANZACs fought for our freedom and made Australia what it is today, and their spirit and courage in battle is something we can never thank them enough for,” Courtney said. “To have the original ANZACs shadowed across my car is a strong image that really brings home the impact of what diggers went through, and it’s great of Holden to give up its space for the appeal. “It’s a special time of year and something I really look forward to representing with pride.”

Given the national significance of the day and the wide support for the annual initiative by Holden and HRT, the 2015 ANZAC Appeal livery has been one of the most highly requested models from collector’s for Biante to produce for quite some time. We’re very pleased that we have been able to gain approval to produce it and in staying true to the purpose of the ANZAC livery each year, part proceeds of the sale of this model will be donated to the RSL’s ANZAC Appeal.

Once produced, this model will complete the 1:18 Scale set of various liveries raced by the Holden Racing Team during the 2015 season to celebrate their 25th Anniversary and it’s fair to say that we have left the most important livery until last. It’s one that shouldn’t be missed.

This replica of Courtney’s 2015 Holden Racing Team ANZAC Appeal Commodore will be produced in die-cast with fully opening parts other than the boot with detailed engine bay, highly detailed racing interior and faithfully replicated livery. It will be produced in an exclusive limited edition quantity and will include a numbered Certificate of Authenticity.