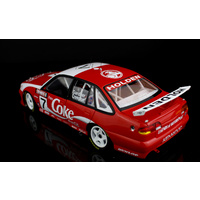 For the 1995 Bathurst 1000, Gardner was partnered with Crompton in the #7 Commodore, starting 4th on the grid.

Gardner had made the perfect getaway, with a bit of wheel spin he surged pas the other cars making it to Hell cornor, alone and in the lead. But the gap slowly closed until the lead nine cars ran nose to like a multi-car high-speed train acros the mountain. On lap 6 Richards relieved Gardner of the lead, from there it was a challenge to hold position.

The days temperature was warming causing the tyre to over heat, but as the fuel load reduced the car became more manageable, although not much faster.

Gardner and Compton were settled into a consitent fourth spot, when Compton handed back to Gardner for the run home, climbing one position. Compton and Gardner had driven faultlessly, and as fast as the Commodore and tyres would allow.

The model has amazing interior, engine, boot and chassis detail.

Each superbly crafted car is uniquely identified with an etched metal number plate on the chassis.

This unique number is the edition number of the model.