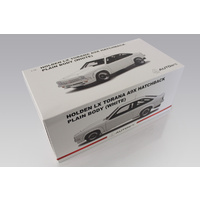 Up for sale is a AUTOart 1:18 White Holden LX Torana A9X

This is the last one from my collection, can no longer buy these directly.

The Holden Torana is one of Australia’s most recognised nameplates and after its humble beginnings, it wasn’t long before the humble 6-cylinder engine found its way into the range. This transformed the Torana into a light, nimble driving machine that was simply put: FAST! The evolution wasn’t limited to what was under the bonnet. The body and styling transformed from the sleek LC and LJ range to the decidedly sharper and significantly “meaner” looking LH and LX models, which culminated in perhaps Australia’s ultimate muscle car, the Holden LX Torana SS A9X.

The A9X was built with one purpose in mind, to dominate Mount Panorama. Significant upgrades in almost every area of the car were engineered to give the A9X the edge on its competition, both on the road and more importantly on the track. A new floor-plan enabled the A9X to use a new rear axle and 4 wheel disc brake set up, the steering gear was now mounted onto the chassis which improved the steering feedback significantly, the radial tuned suspension was another integral aspect which attributed to the drive-ability of the car, and even the front spoiler of the A9X was designed to incorporate vents to channel cool air onto the front calipers. This helped the braking capacity for this beast, allowing the driver to draw every last inch of power out of the 5 litre V8 engine.

The A9X certainly lived up to Holden’s hopes and dreams of dominating Bathurst, with it taking out the 1978 and 1979 events under Peter Brock and Jim Richards in what is now considered by many as one of the greatest performances in the history of The Great Race.

With that performance in mind, we have developed our first 1:18 Scale Holden LX Torana A9X Plain Body to reflect a “clean skin” version of what was racing around the mountain during the late 70’s. The model is a fully ‘racing spec’ optioned A9X including racing engine bay, wheels and interior, free to display as is, or to decorate to your heart’s content.