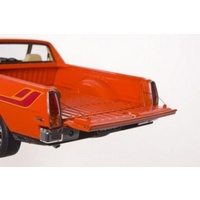 The Holden HX was more of a necessity than a want for Holden, as the main reason for its development was to comply with new Australian Design Rules relating to lower exhaust emissions.

While Ford had pre-empted the move and had spent quite a bit of time re-designing their engines, Holden had chosen to simply add emission controls to existing suite of engines, and make minor cosmetic tweaks to the exterior to justify the new HX designation.

To that end, the HX Sandman Ute also received these external changes Also, a Sandman wouldn't be a Sandman without its own bold styling, so the HX received new side striping and that unmistakable full width tailgate decal Inside the ute also received some modifications, the most notable being a steering column mounted windscreen wiper and light dimmer switch.

Comes with certificate of authenticity.

Highly detailed features including the engine bay, interior, wheels and undercarriage is an exceptional replication of this much loved car.