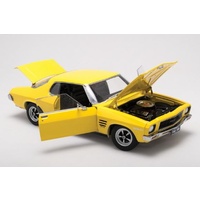 Biante Model Cars are very pleased to present the 1:18 Scale Holden HQ Monaro GTS 350 Coupe in the outstanding Yellow Dolly colour scheme. Collectors have frequently requested Biante to produce this model over a long period of time. It is worth noting that this is only the second 1972 HQ GTS 350 Monaro which features the iconic ‘350’ decal on the front quarter panels. The first was the very popular Brooklands Blue version which is now a highly sought after model on the second hand market.

The Holden Monaro could easily lay claim to being one of Australia’s most iconic and most beloved cars that has ever been produced. From its inception in 1968, to its modern evolution in 2001, the Monaro has, and always will have a place in the Australian motor enthusiasts heart.

The HQ Monaro was the first model series to make up the second generation of Monaro’s produced for the Australian market from 1971 to 1977. The new HQ series featured a new body design and the new coupe design wasn’t initially considered as sporty looking as the previously released HK, HT and HG versions of the car. Some attributed this to the overall shape with the rear window being larger and the rear quarter window being more square than previous versions. This affected the curve and slope of roof flowing into the rear of the car. However, these initial concerns were eventually dismissed with the HQ now being considered one of the best designs produced by an Australian manufacturer.

The HQ Monaro GTS was faced with some unfortunate competition from within its own ranks, which some argue hurt its progress at the time. The Statesman luxury sedan was also available with the 350 engine as an option and the replacement of the bigger coupes with the Holden Torana GTR XU-1 as Holden’s favoured machine for Touring Car racing both combined to detract some of the attention away from the Monaro. While it may have faced some minor problems back in it’s hey-day, if you’re lucky enough to still have one in your garage today then you’re most likely very pleased with yourself because a factory HQ GTS 350 Coupe is considered quite rare indeed, with pristine examples fetching prices up to 0,000.

This 1:18 scale replica of the Yellow Dolly GTS 350 is a remarkable example of such an iconic car. This model is a faithful replication of its 1:1 counterpart and some of the features include fully opening parts, realistic interior, high quality paint finishing, pose-able steering and will be an exclusive limited edition. If you’re a Monaro fan or a classic Australian road car collector then this is another model that should be added to your collection.