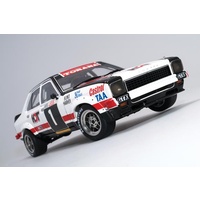 Harry Firth and the Holden Dealer Team certainly had something to prove heading to Mount Panorama for the 1976 Hardie-Ferodo 1000 at Bathurst. While the crack Holden squad had tasted success in the 1974 ManChamp Series and 1975 Australian Touring Car Championship, the jewel in the Australian motorsport crown - the Bathurst 1000 - had so far eluded their factory L34 Toranas. After failing on a grand scale in 1974 and being out-done by privateer Peter Brock in 1975, Firth was eager for a result and teamed his two top drivers, Colin Bond and John Harvey, in the lead #1 Marlboro HDT Torana to achieve it.

Bond had fought a season-long battle with Moffat in the sprint races and heading into Bathurst the Ford pilot held the upper hand. A total of sixteen L34 Toranas started the race, but the weight of expectation all sat with Bond and Harvey as the factory car. Moffat put his XB Falcon Hardtop on pole, closely followed by Brock with Bond third.

Moffat won the run to the first corner, closely followed by a hard-charging Bond, but as the leaders headed up the Mountain they had left behind Jack Brabham, who was promptly rammed by behind by the Dolomite of John Dellaca. Moffat and Bond exchanged the lead in the early laps, playing a two-car chess match before Brock bought into the battle and relegated Bond back to third. Soon the Toranas of Allan Grice and Bob Morris were also knocking on the HDT L34s door.

Bond drove the first two stints of the race before handing the car to Harvey, who was joined in battle by expat Aussie Vern Schuppan, now driving Moffat’s Falcon. But the furious pace of the early running soon began to take its toll. Brock stopped on the track with fuel pick-up issues, Grice retired with a split rocker nut, and importantly for the General, Moffat retired on lap 87 with a broken crankshaft pulley.

This left Bond and Harvey out in the lead, a position they held for the next two hours. With a two-lap lead over the second-placed Morris/John Fitzpatrick Torana, the #1 HDT car pitted for an unexpected brake-pad change. Bond rejoined the race behind Morris, the pair of Toranas the only two cars on the lead lap. As the race drew to a close Bond’s Torana began overheating. A fan belt had broken, all but cooking the HDT car’s engine. While the belt was replaced, Bond was told to limp the car to the flag. Brit Fitzpatrick – at the helm of Morris’ smoking and wounded Ron Hodgson Motors L34 – led into a thrilling last lap, limping around as Bond furiously pushed to catch the all-but-dead leading car. Eventually the Morris/Fitzpatrick car took the chequered flag on a wing and a prayer with Bond/Harvey finishing second and another five Toranas following to complete the top seven.

But the drama didn’t end with the race. The HDT lap scorers had the #1 Bond/Harvey car ahead on the track and scored as the rightful winner. To this day conspiracy theorists claim the HDT car was the rightful winner and that Holden elected not to protest the result because they didn’t want to be seen to be crushing a privateer Holden team owned by a prominent Sydney Holden Dealer. Whether it was the ‘real’ Bathurst winner or not, the Bond/Harvey HDT Torana L34 fought long and hard at Mount Panorama in 1976 and is in the history books as a gallant runner-up in the 1000-kilometre classic. It forever holds a special place in the history books of Australia’s ‘Great Race’.

Produced in die-cast with fully opening parts, highly detailed engine bay, boot, racing interior and a beautifully replicated livery, this is a must have limited edition collectable for Holden, HRT and Bathurst 1000 fans.