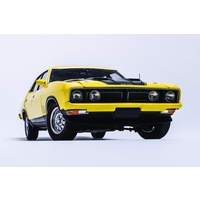 In September 1973, Ford introduced an update of its XA Falcon, launching the improved XB. This evolution of the XA featured the now locally produced Cleveland 351 V8, rather than its imported equivalent, four wheel disc brakes all round and colour keyed bumpers as standard. Also, the XB featured much cleaner and tidier lines than its predecessor, most noticeably at the front, where a more aggressive nose was adapted, including the ‘egg-crate’ front grill. Around 1950 GT Sedans were produced from 1973 through to 1976, with Yellow Blaze perhaps being the most popular colour available.

AUTOart are so proud to finally present this model to it's very patient collectors so they can add an integral piece to the Ford Falcon GT collection.
Being the first edition of a new GT range, we expect demand to be strong so please remember to get your order in to avoid disappointment. It will be produced in a strictly limited edition run complete with a numbered Certificate of Authenticity.

This high quality model features fully opening parts, faithfully replicated specific car features based on extensive research including an accurately replicated engine bay, interior, wheels and fine paint finishing.
This also marks a new standard in Autoart’s efforts to provide us with ever increasingly accurate models. An original car was hand 3D scanned to get the shape as close to original as possible. It also has been replicated in the new composite material which Autoart has been perfecting over the last few years. It allows us to finally bring the XB GT Sedan to the market after what felt like a lifetime of waiting!