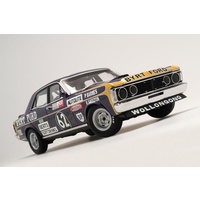 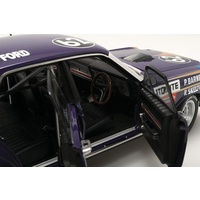 There is no doubt at all that the Ford Falcon XY GTHO Phase III will remain one of, if not the most, iconic Australian muscle car in history. While it was revered as a tough road car, it was on the racetrack battlegrounds including Mount Panorama at Bathurst that the third incarnation of Ford’s popular ‘HO’ really stamped its mark.

Launched in time for the 1971 Hardie-Ferodo 500 at Bathurst, the Phase III featured plenty of improvements and additions over the its Phase II predecessor; a distinctive ‘shaker’ ram air inlet, an adjustable rear boot spoiler, modified cylinder head, better head gaskets (from the Boss Mustang), improved radiator, wider drum brakes and heavier anti-roll bars. On sale at the time for the sum of 50 it was immediately recognised as a classic and the 351 Cleveland-powered Ford could scamper from 0 to 100 km/h in 6.5-seconds.

A total of 13 Ford Falcon XY GTHO Phase IIIs appeared on the grid for The Great Race and the mighty 351 cubic inch V8 Falcon was expected to be the dominant force in Class E, while Class D was the domain of its two main challengers: Holden’s Torana XU1 and Valiant’s E38 Charger. All up, a grid of 60 cars across five classes would start the 1971 Mountain classic.

South Wollongong Ford dealer Bryan Byrt (later to become perhaps better known as a Queensland Ford dealer!) was one of a range of private entrants who secured one of the new machines for an assault on Mount Panorama, but ordered an unusually coloured ‘wild violet’ purple option. Offiical records show that the car that became his 1971 Bathurst challenger was the last one produced by Ford in this striking colour, which certainly achieved Byrt’s goal of standing out from the crowd!

After debuting at the Sandown 250 lead-up race, the team headed to Bathurst with Phil Barnes and Bob Skelton as its two drivers. The Barnes/Skelton entry qualified sixth on the grid with a lap of 2m45.4s in practice, quite a way off Allan Moffat’s pole time of 2m38.9s but still enough to help Ford dominate the time sheet given there were eight in the top nine spots on the grid. Barnes started the race in the Bryan Byrt entry and settled into a handy pace early on in fifth place. A solid and consistent race (and some problems with some of the other Falcons) saw them rise up the lap charts to second place, a position they held to the end.

The duo finished one lap behind winner Moffat and just over 13 seconds clear of the third-placed Falcon of David McKay. In fact, the #62 Falcon guaranteed itself a place in the photos of winner Moffat crossing the line as Skelton pulled alongside the factory GTHO and formed up alongside for a 1-2 ‘styled’ finish as the chequered flag fell. The Phase III Falcons filled five of the top six finishing positions at Bathurst in 1971, underlining how dominant they had really been.

The Bryan Byrt Falcon would achieve a unique place in Bathurst history the next year as John French took the same car to another runner-up result behind a young Torana tear-away called Peter Brock. Its performance in 1971 really stood out though given it was clocked at a very speedy 242 km/h (151 mph) down Conrod Straight, giving it the distinction of recording the event’s highest top speed to that point in its history.

Comes with a certificate of authenticity.

Produced in high quality diecast with fully opening parts, high attention to detail and impressive finishing, the 1:18 Scale 1971 Bathurst Runner-Up GTHO Phase III is a must have for fans of the Blue oval and the Great Race.