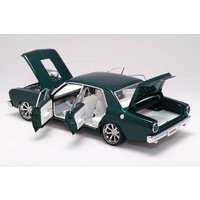 Biante Model Cars are extremely excited to present to you the 1:18 Scale Ford XR Falcon Street Machine in the intimidating metallic Empire Green with White Interior colour scheme. Nick named “Nemisis” - this is the second XR Street Machine produced by Biante, following on from the very popular Passion Purple edition we have released previously.

As you can see, this XR is a fully custom job. Similar to our previously released XR, the engine block and blower are a real stand out feature on this model. Under (and partially through) the bonnet is a 351 Windsor V8 engine including a 6:71 Supercharger with twin four barrel Holly carbs and a bug catcher scoop. A new feature on this street machine model are the large diameter retro minilight wheels featuring stacked width tyres front to rear which give the model an exceptional looking stance. We have listened to our collectors because the stacked wheel width was probably the most requested feature to add to the Street Machine range and we’re pleased to have included the option with this model.

While the engine is impressive, many would agree that the paint job and interior are also a stand out feature. The metallic Empire Green paint job is subtle but quite powerful looking and contrasts remarkably against the white interior. It’s very difficult to present the colour in photos compared to seeing the model first hand but the emerald hue is so deep you could almost dive in!

Featuring plenty of chrome highlights, fully opening parts, high detail and beautiful finishing, this is another street machine model that will be an exceptional addition to die-cast model collections.