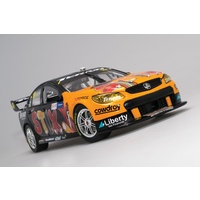 After star driver Shane Van Gisbergen left team at the end of the 2015 season for Red Bull Racing Australia, Will Davison became his surprise replacement at Tenkno for the 2016 championship after a stint at Erebus Motorsport V8.

There’s no question that Tekno have produced some outstanding results over their relatively short time in the championship but there were lingering questions over how the team would perform in 2016 with the loss of Van Gisbergen and potentially loosing sponsorship dollars as well. Thankfully, Darrell Lea continued their major backing of the team for 2016 and it didn’t take long for Davison to make an impact on the scoreboard for his new team.

The second round of the 2016 championship rolled into Tasmania at Symmons Plains and it was a successful weekend for Queensland based team. A third place podium finish for Davison on the Saturday in Race 4 kicked proceedings off nicely. Sunday’s race 5 saw Davison start from position 3 and the result was determined by what can only be described as a pretty dramatic finish. With oil on the track at the hairpin on turn 4, race leaders Winterbottom and Van Gisbergen were forced off the track. With Davison following in third place, he managed to navigate his way through the corner and maintain the lead to the finish to take out the win in a great moment for the team.

It’s one that Will Davison and Tekno fans shouldn’t miss.

This model will be produced in die cast with fully opening parts other than the boot, highly detailed interior, faithfully replicated engine bay and beautiful finishing. It will be a limited edition and will come with a numbered Certificate of Authenticity.