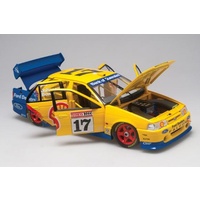 Biante Model Cars are very pleased to present the 1:18 Scale Ford EB Falcon driven by Dick Johnson and John Bowe at the 1993 Tooheys 1000. The introduction of five-litre V8 rules to Australian touring car racing full-time in 1993 brought plenty of interest in the revitalised battle between Holden’s Commodore and Ford’s Falcon. A Falcon had not been seen in the top tier of the sport since the end of Group C regulations in 1984, so Ford fans were thrilled to see their hero Dick Johnson and teammate John Bowe compete in a pair of Shell EB models for the ’93 Australian Touring Car Championship.

After six years racing turbocharged Sierras, Johnson’s team constructed a pair of cars to compete under the new V8 rules, which of course today we now know as V8 Supercars. Come the Tooheys 1000 at Bathurst that year and Johnson and Bowe paired up in the lead #17 entry (Johnson’s regular car) while Kiwi Paul Radisich and Cameron McConville were signed to pilot the second #18 car, which had been raced for the season by Bowe. Late in the ATCC a change to the aerodynamics package of the Commodore had helped Holden runners become competitive with the previously dominant Ford teams of Johnson and Glenn Seton.

When the annual October classic at Bathurst rolled around it quickly became apparent that the lead Gibson Motorsport Commodore of Mark Skaife/Jim Richards and the Castrol Commodore of Larry Perkins and the late Gregg Hansford were the class of the field. The Ford runners, including both Shell cars, simply didn’t have the speed to match it with the Holdens and that was instantly apparent early in race week. In those days, on-track activity at Bathurst began with unofficial practice on Wednesday and the #17 Johnson/Bowe car ended the day third fastest with a 2m15.021s lap thanks to Bowe. Qualifying began on Thursday and the duo backed up their previous days’ efforts with a time only a tenth slower before Bowe dipped into the 2m14s bracket in the afternoon to be seventh overall. “It’s obvious we’ve been out-homologated by Holden,” Bowe told The Great Race book covering the annual endurance classic. “We worked real hard to get every bit of speed out of the car today.”

Final qualifying on Friday saw #17 book a place in the Tooheys Top 10 Shootout, fifth fastest with a 2m14.763s. As was customary, Johnson took the controls for the Saturday morning sprint for pole position, which initially saw him miss running sixth in order against the clock (the order was slowest to fastest based on qualifying times) due to an engine problem later traced to two bolts coming out of a rocker and turning the V8 into a V7! He was able to run last against the clock and carded a 2m15.386s to put he and Bowe fifth, and best Falcon runner, on the grid. Worryingly for the Shell team and all Ford runners, Perkins’ pole time was a whole 2.3-seconds faster than Johnson.

On race day it was Johnson who took the first stint in the #17 Falcon and the then-two-time winner found himself stuck behind the Holden Racing Team Commodore of Wayne Gardner, which was struggling with quickly blistering tyres. The frustration was too much and the Queensland ace made a lunge at the 1987 World 500cc Motorcycle Champion at Forrest’s Elbow on lap 11. It didn’t work and the Falcon pirouetted, forcing Johnson to reverse backwards down the first part of Conrod Straight into a driveway (which in fact leads to the clubrooms of the Bathurst Light Car Club) to help him turn around and re-join the race back in 12th.

He was soon pit-bound to replace a set of flat-spotted Dunlops and resumed back in 19th spot. The incident would set the tone for a difficult day at the Mountain. Bowe took over after 43 laps but was back into the pits a lap later to correct a bent tie-rod end bolt, which cost #17 over four minutes and dumped them back to 14th and well off the leaders. Johnson later climbed back aboard and had recovered to sixth place and a lap off the lead before it all went wrong on the run across the top of the Mountain on the approach to Reid Park. Canberra privateer Bill O’Brien lost control of his Everlast Commodore on the rubber marbles on the edge of the track while looking to let him through and speared back across the road at Johnson, who was trying to take avoiding action.

A collision was inevitable and the yellow Commodore sent the yellow Falcon cannoning off into the concrete wall and out of the race with just 96 laps to its name. The accident set off a tidal wave of emotion about ‘once a year drivers’ with Johnson and Bowe leading the charge. “It beats me how some of these guys get an international licence to race once a year,” said Johnson. “We’ve got to get the rest of the system up to the speed of our cars. It’s frustrating to try so hard, get so far then have something like this happen.” It was a crushing (and expensive) way for Johnson’s first Bathurst in a V8 Falcon in nine years to come to an end.

Certificate of Authenticity that has been persoanlly signed by Dick Johnson and John Bowe.