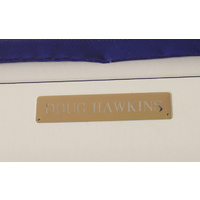 Doug Hawkins has been unveiled as the fourth Club Legend in the Footscray-Western Bulldogs Hall of Fame, announced at the official 2014 Season Launch at Crown Palladium tonight.

Hawkins, who played 329 games for Footscray between 1978 to 1994, was elevated to Legend status after initially being inducted into the Hall of Fame in 2010 – joining the likes of Charles Sutton, EJ Whitten and John Schultz.

The 53-year-old’s AFL career is filled with accolades, captaining the Bulldogs from 1990-93, winning a Club Best & Fairest (1985), representing Victoria five times, as well as being named as vice-captain of the Footscray -Western Bulldogs Team of the Century.

Three past players were also recognised for their significant and ongoing contributions to the Bulldogs, with Brad Johnson, John Jillard and Rohan Smith inducted into the Hall of Fame.

Embodying the courage and determination of many before him, Jillard forged a successful career on the half back flank beginning in the 1950’s – playing 189 games for Footscray.

Named in the back line of the Footscray-Western Bulldogs Team of the Century, Jillard featured in the 1961 Grand Final and went on to win the Club Best and Fairest in 1967.

The great clubman passed away aged 57, however his children Mark and Kim along with his granddaughter Kristi accepted the award on his behalf.

Current Assistant Coach Rohan Smith has also been recognised for his invaluable contributions to the Club as both player and staff – as one of just six players to notch over 300 games at the kennel.

The 1998 EJ Whitten Medallist – awarded after one of his three representative games for Victoria – returned to the Club ahead of season 2012 as Skills and Acquisitions Coach and was promoted to Assistant Coach ahead of 2013.

Displayed in a stained timber frame with glass.