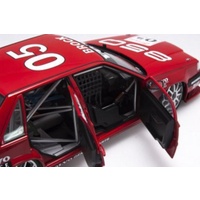 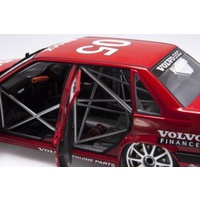 The announcement of Volvo joining the V8 Supercars Championship in 2014 created plenty of interest, but its last assault on Australian motor racing in the mid-1990s was one that helped give it massive ‘street cred’ After claiming the Australian Touring Car Championship in 1986 with a turbocharged 240 model in the hands of Kiwi Robbie Francevic, Volvo returned a decade later to compete in the two-litre Australian Super Touring Championship.

Initially an ex-British Touring Car Championship station wagon was imported in 1995 for Tony Scott to drive, before an ex-BTCC 850 Sedan was secured for 1996 as well as a famous pilot. Peter Brock signed a deal to drive for Volvo alongside his existing commitments in the Australian Touring Car Championship with the Mobil Holden Racing Team and its five-litre Commodore program. This created some angst and politicking, but Brock simply got on with the job and enjoyed competing in both forms of racing. He drove the distinctive red #05 five-cylinder Volvo in the eight round Super Touring series, which had completed six of its eight rounds by the time October rolled around.

Two-litre cars had previously formed their own class in the Bathurst 1000 before the category decided not to compete in 1995 and the 161-lap classic was, for the first time ever, a V8-only event. In 1996 the two-litre cars returned to Bathurst as a support category for the AMP Bathurst 1000, competing in three non-championship sprint races. Both Brock and fellow HRT endurance driver Greg Murphy (a works Audi driver signed by HRT to co-drive the team’s eventual race-winning #1 entry with Craig Lowndes) focused on their V8 commitments in the main race, opening up their regular cars to replacement drivers for the weekend. The Orix Audi team grabbed rapid Italian female Super Touring driver Tamara Vidali to replace Murphy, while Volvo signed a driver who was competing in the main V8 race – none other than Jim Richards.

Richards was co-driving with son Steven in Garry Rogers’ Valvoline Commodore but had no problems in accepting the offer to drive the Volvo, which retained Brock’s familiar #05. To drive a Brock #05 vehicle at Bathurst was no new thing for Richards, given he co-drove with Brock to three successive Bathurst 1000 victories in 1978, 1979 and 1980 at the height of the Holden Dealer Team. After running on Dunlop tyres earlier in the year, the Volvo team under George Shepheard swapped to Michelin tyres for Bathurst (and indeed the rest of the series) with Richards qualifying fifth behind the BMWs of Craig Baird and Geoff Brabham, Brad Jones (Audi) and Paul Morris (BMW). The expat Kiwi finished second to Baird in the opening five-lap sprint on Saturday before again finishing runner-up to the BMW pilot in the second five-lap sprint, which followed soon after.

The final race, an eight-lapper, was held on Sunday morning ahead of the main AMP Bathurst 1000 and drivers found themselves faced with miserable, wet conditions. Richards was forced to start fifth given the grid for Race 3 reverted to qualifying times, though the race start was delayed due to the conditions – and the fact that Baird skated off on the formation lap and Vidali almost followed suit! The Volvo pilot was able to enter Hell Corner in fourth place and set about picking off the three BMWs one-by-one. He moved by Brabham then Baird, and chased down leader Morris, eventually catching and passing the Diet-Coke car on lap four at Griffin’s Bend. From there Richards was able to control the race and withstand the pressure from Jones’ four-wheel-drive Audi Quattro A4 to seal a popular victory, the first for Volvo in Super Touring and their first in Australian touring car racing since Robbie Francevic at Adelaide International Raceway in 1986. Brock took back the #05 850 for the rest of the Super Touring season, though Richards’ association with the Swedish manufacturer was only just beginning. He replaced Brock in the team’s entry in 1997 full-time and went on to win another Bathurst 1000 crown in 1998 in an S40 with Swede Rickard Rydell.

We’re pleased to present the opportunity to place your orders for this model, another replica from the iconic career of Jim Richards.